About the NRLN Utah Chapter

The NRLN Utah Chapter was established in 2011 when the Association of US West Retirees (AUSWR) closed for business. It was determined by the regional officers that all that could be done by the courts for its retirees had been done. However, with the continued efforts by our former companies and Congress to change the agreements we made with our employers in accordance with ERISA Laws, there was more yet to be done. It was recommended that we continue this effort for retirees and seniors by becoming members and supporting financially the National Retiree Legislative Network (NRLN)

Emails from the NRLN – If you are not receiving Chapter and NRLN emails, send an email to contact@nrln.org or call toll free 866-360-7197

Action Alerts needing your action now (If you have taken action—Thank you!) Go to: www.nrln.org/SE.html#/ to access NRLN Action Alerts.

Reduced Drug Cost – Check Good Rx (that is all you have to type in your browser) to obtain a coupon for a reduced price if the drug is available. Go to www.nrln.org/links.htm to access the NRLN Useful Links webpage for other useful information for seniors.

You should know who represents you in Congress.

Below are their names and Washington DC phone numbers. If you don’t know your Representative and Senators, go to: www.nrln.org/congresslegs.html#/legislators/. Type in your street address and zip and click GO. The names and photos of your members of Congress will appear.

Goto: www.nrln.org/congresslegs.html#/legislators/ and select your state on the USA map. When your state appears, click the EXCEL Download tab.

Again, I have not read the current information you have received. I just want you to be sure that you are making the right decision for your health care.

Judy Stenberg’s Report to You

Judy had meetings on Capitol Hill on September 24 and 25, 2019 during the National Retiree Legislative Network (NRLN) fall Fly-In to Washington, DC. She met with the lead staff for Senators Jeff Merkley (OR), Patty Murray (WA), and Ron Wyden (OR). She also met with the lead staff for Representatives Derek Kilmer (WA-06), Adam Smith (WA-09), Pramila Jayapal (WA-09) and Suzan DelBene (WA-01). There were four issues discussed.

There are concerns about these MA Plans. Since from 1997 to 2018 the government has paid out $380 in subsidies. In the years 2019-2020 Congress passed the 2018 Bipartisan Balance Budge Act authorizing Health and Human Services to add Medicare Advantage benefits costing $16.5 billion a year. This spending was for chronic care products and services such as changing air filters and shampooing carpets for at-home Asthma patients and much more. Whether these kinds of services will truly make a difference for people is up for debate. None of these added benefits are given to the 38.2 million seniors that are on Original Medicare A and B plans. It is only going to the 21.3 million in Medicare Advantage Plans. It is discriminatory.

Again Judy stressed, in no uncertain terms, how angry their constituents are about the drug crisis. She pointed out to each person she met with, whether the Representative or Senator had co-sponsored the drug bills that the NRLN urges Congress to pass. Judy told them again about the NRLN Report Card for each member of Congress and that these report cards are on the NRLN website for all to see.

The meetings included statements that Congress must enact a policy that mandates Health and Human Services to implement a competitive bidding model that will permit direct purchasing of prescription drugs from manufacturers. This does not create a bigger government, it will make HHS more efficient and saves Medicare billions annually. We noted that our members retired from over 300 U. S. companies and public entities with hands-on business experience in developing, producing, and delivering American goods and services at high quality world class standards. The NRLN applies this expertise to recommending public policies that protect senior income and healthcare (Medicare and Drugs).

The NRLN did an extensive review of the Social Security bills that have been introduced in Congress and determined we should support the passage of H.R. 860 / S. 269 (the Social Security 2100 Act). Passage of this Act will ensure solvency of the program for 75 years, provide an increase of about 2% across the board and cut income taxes on Social Security benefits for about 12 million middle–income Americans.

To pay for the Act there would be a raise in the payroll tax rate starting 2020 so that by 2043 workers and employers each would pay 7.4% instead of the 6.2% they pay today. And a payroll tax rate would be imposed to a current earnings amount above $400,000.

Please go to https://nrln.org/SE.html#/ to take action in telling your Representative and Senator to support the pass H.R. 860 and S. 269 to save Social Security.

Judy chose to bring up corporate de-risking again. As reported before, many companies are planning to sell their pensions to insurance companies for annuities in the near future. If companies makes this move you will become a single annuitant and you will lose all of your government protections through the Pension Benefit Guaranty Corporation and Employee Retirement Income Security Act.

The NRLN advocates that when a full plan termination takes place retirees should have 90 days’ notice prior to a plan termination, the option of rejecting an annuity buyout individually, and the NRLN has outlined safe harbors, which must be put in place to protect those that take annuities.

Read about the Donut Hole 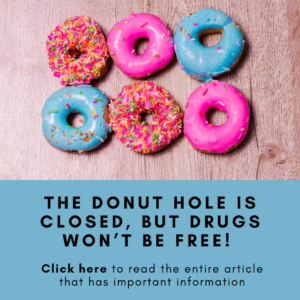 The State Health Information Program (each state has an acronym) helps Medicare beneficiaries better understand their Medicare coverage options and benefits. Counselors help seniors make informed decisions by providing free and unbiased guidance. The counselors have extensive training and are volunteers under a Federal program in each state. Following is the phone number for your state: Utah 800-541-7735 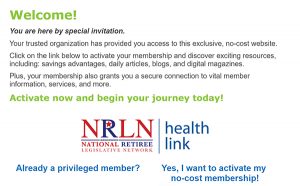