The NRLN General Motors Retirees Chapter (GMRC) was launched on September 18, 2014 at a breakfast meeting in Troy, Michigan attended by 134 GM retirees and spouses. GMRC is reaching out to General Motors retirees and future retirees so it can increase Grassroots Network Members’ participation in advocating federal legislation to protect retirement income security and reduce health care costs. At the top of most GM retirees’ list of concerns are Social Security and Medicare protection and reducing the cost of prescription drugs. The Chapter brings together GM retirees and future retirees who want to unite their common interests in having a voice in Washington, D.C. by advancing the NRLN’s Legislative agenda to benefit GM retirees and all of America’s retirees.

Why the NRLN / GMRC Is Relevant to GM Retirees

GM terminated health care at age 65 but added $300/month per retiree or surviving spouse to pensions, replaced pensions with lump sums or Prudential annuities, life insurance was reduced to $10,000 for retirees of record on 8/1/2009 and as of 1/1/2014 life insurance was terminated for all other current and future retirees. Here is what’s left to protect:

Social Security – The NRLN is lobbying for the passage the Social Security 2100 Act. It would ensure funding the program for the next 75 years and change the Cost-of-Living Adjustment (COLA) from the current CPI-W pegged to urban wage earners’ living expenses to CPI-E (Elderly) based on older Americans’ spending patterns, including medical costs.

Trust Act – The NRLN is opposing the TRUST Act which would create “rescue committees” for Social Security and Medicare that would operate outside of the regular order of Congress, behind closed doors, and the committees’ recommendations would be fast-tracked for votes without amendments on a take-it-or-leave-it basis. Funding needs to be increased for the Social Security Trust and Medicare Trust, but the policies should not be made without public Congressional hearings and behind closed doors.

Inpatient Rule – The NRLN is lobbying for passage of the Improving Access to Medicare Coverage Act which would fix an arbitrary Medicare rule that patients who receive hospital care on “observation status” do not qualify for the benefit of skilled nursing care, even if their hospital stay lasts longer than three days and even if their care team prescribes it. Under current Medicare policy, a beneficiary must have an “inpatient” hospital stay of at least three days for Medicare to cover skilled nursing care. Patients on “observation status” are either forced to return home without the treatment they have been prescribed, or, as often happens, they believed they were an “inpatient” and are unexpectedly billed astronomical amounts after their stays in a skilled nursing facility.

Prescription Drugs – We are lobbying for bills to reduce the price of prescription drugs by allowing Medicare to do competitive bidding, end pay-for-delay and other brand name drug makers’ tactics that keep generics off the market and support importation of less expensive drugs that meet FDA safety standards.

Telehealth – Telehealth has been a critical lifeline for millions of retirees who needed care during the COVID-19 pandemic. The NRLN is lobbying to make sure that telehealth coverage for Medicare beneficiaries is made permanent.

Taxes – The NRLN advocates legislation to amend the tax code to eliminate federal and state taxes on all Social Security income and/or allow a tax credit for taxes withheld.

Fall has arrived here in Michigan, and we are enjoying the cooler temps and the beautiful colors. We try not to think too far beyond that because we know what comes next. Time to dig out the boots and hats. As I thought about what to include in this edition of the Newsletter I decided to do some strolling through the GM.com web site. While I continue to be disappointed that the web site has no reference to Retirees, (or at least none that I could find), I did find some interesting news items about what is going on at GM, and I would encourage you to do some exploring on the site.

As always, I would encourage you to check the NRLN website (www.nrln.org) news related to Retiree issues. For most of us, the best thing we can do to be “part of the solution” is to click on the “Action Alert” button when we get a request from the NRLN. You can learn more about the NRLN Legislative Agenda and listen to the most recent Podcast from our President, Bill Kadereit, by visiting www.nrln.org.

Current issues highlighted on www.nrln.org are:

Summer has officially arrived with record heat across much of the country. It almost makes you forget all those cold days back in January and February. Too bad we can’t find a way to bottle up this heat and carry it into next winter. Despite the heat wave, the NRLN continues to press our elected officials for common sense solutions to the issues that affect all Retirees.

I encourage you to read the Summer 2022 edition of the NRLN FOCUS Newsletter HERE. President Kadereit explains the current situation with the on-going effort to privatize traditional Medicare. In typical government slight-of-hand, the CMS solves the problem by inventing more acronyms that use big words to say nothing. As Bill correctly says in his column, “privatization of Medicare will fail again!” The NRLN will continue to fight this fight and push for solutions that make sense.

The battle also continues over the funding of Medicare and Social Security. Some of us may not see this as a personal concern, but it certainly is for our children and grandchildren. This political football continues to be kicked around, with each side pointing fingers at the other side, and no one stepping into the breach to lead us to a solution. We all need to communicate with our elected officials at all levels of government urging them to act now to find a solution to this impending tsunami. This is NOT a right or left problem. It is an “all of us” problem.

As always, I urge you to be “part of the solution” and help the NRLN advocate for legislation that will help all retirees. Respond to the “Action Alert” requests because it does make a difference. A lot of individual voices add up to a BIG voice and may just be the leverage that is needed to pass legislation that will help all retirees. You can learn more about the NRLN Legislative Agenda and listen to the most recent Podcast from our President, Bill Kadereit by visiting nrln.org.

I normally start these messages with comments about the weather, good or bad, here in Michigan. Then I move on to some non-offensive, (at least I hope they are non-offensive), comments about the political situation in DC. Considering what is going on in Eastern Europe and Ukraine, that all seems trivial and meaningless. I ask that, if you are a believer, please pray for peace and sanity.

The NRLN continues to advocate for all Retirees, and I would encourage you to check the website on a regular basis for news and views. For most of us, the best thing we can do to be “part of the solution” is to click on the “Action Alert” button when we get a request from the NRLN. A lot of individual voices add up to a BIG voice and may just be the leverage that is needed to pass legislation that will help all retirees. You can learn more about the NRLN Legislative Agenda and listen to the most recent Podcast from our President, Bill Kadereit by visiting nrln.org.

Current issues highlighted on nrln.org are:

Become an NRLN/GMRC Individual Member by making an annual contribution of $25, $50, $75 or more. Any amount you can contribute will be appreciated.  You may make your check or money order payable to NRLN, Inc. and mail it with the Contribution Form.  Or, make your contribution with your credit card.  Click HERE to make a contribution.

The NRLN is a nonprofit, tax-exempt organization. Contributions are not tax deductible.

Or, make your contribution online with your credit card here.

READ NRLN Review HERE
SIGN UP to Receive Our Newsletter 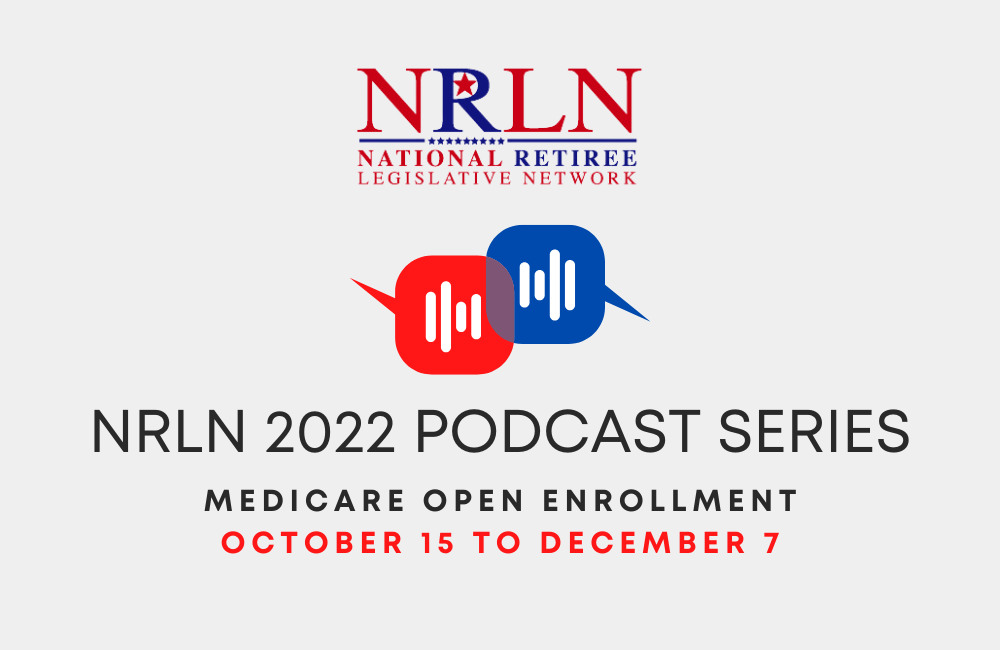 General Motors President says ‘the ICE age is not over’ amid shift to EVs By Gary Gastelu, Fox Business – Nov 17, 2022

General Motors delays US electrification goals by half a year By Chris Randall; Electrive Today  ~ Oct 27, 2022

This Is What Whales Are Betting On General Motors By “Benzinga Insights”; Benzinga ~ Oct 17, 2022

GM delays timeline on employees returning to the office amid backlash By Kalea Hall; The Detroit News ~ Sep 27, 2022

General Motors Suffers a Setback – Cruise, the autonomous vehicle subsidiary of the Detroit giant, was the first company to get a green light for a robotaxi service in California. By Luc Olinga; TheStrteet ~ Sep 05, 2022

Buick to offer buyouts to U.S. dealers as brand prepares for all-electric future By Jordyn Grzelewski; The Detroit News ~ Sep 02, 2022

General Motors CEO Mary Barra: Every vehicle across our brands is very much in demand Fox Business ~ Aug 24, 2022

Welcome to the National Retiree Legislative Network (NRLN) Podcast produced by and for America’s Retirees and those over age 50. I’m Bill Kadereit, President of the NRLN and your Podcast host. READ MORE…

Welcome to the National Retiree Legislative Network (NRLN) Video Podcast produced by and for America’s Retirees and those over age 50 who will someday reach eligibility to receive Pensions, Social Security, Medicare and other benefits they earned and paid for over a lifetime of work. READ MORE…

This website uses cookies to improve your experience. We'll assume you're ok with this, but you can opt-out if you wish. Accept Read More...