On August 25 the NRLN closed its survey which opened on July 13. The purpose of the survey was to collect information on what NRLN members over age 55 pay for healthcare under the coverages of their various insurance plan types; how healthcare costs affect their economic stability, and to assess their interest in adding an out-of-pocket cap to original Medicare – would it help them meet financial obligations.

There were 3,312 survey participants. Their responses to questions showed they mainly rely on original Medicare and a private supplement plan (Medigap) or a Medicare Advantage plan for healthcare but costs are eating way their fixed income.

The participants in the survey were from all 50 states. They retired from 161 companies or public entities. Ages of responders ranged from 55 to over 85 with and the average age of 78.

The National Retiree Legislative Network (NRLN) and the NRLN Villages Chapter are partners in making sure that retirees have a strong voice in Washington, DC. Jim Bodenner, Chapter Leadership Team Member joined other leaders of the NRLN, retiree associations and chapters in February to lobby for the key parts of the NRLN’s legislative agenda on Capitol Hill. Your individual contribution is very important to the NRLN and your Chapter. Please make a contribution as noted in the last paragraph.

Is your Social Security benefit going to last your lifetime and that of your spouse? What about future generations? Social Security will deplete it reserves by 2034. At that time, it will only be able to pay 76% of benefits. The NRLN is supporting passage of Social Security 2100 Act in Congress that will fund the program for the next 75 years.

How secure are your Medicare benefits? Where does the money come from that provides some Medicare participants with more benefits than others? Medicare will deplete its reserves by 2026 and will only be able to pay 90% of benefits. The NRLN opposes the use of taxpayer dollars to subsidize private insurance companies for Medicare Advantage (MA) special benefits that original Medicare beneficiaries are denied. The NRLN is advocating that original Medicare enrollees have access to the special benefits being offered by MA.

Are you paying too much for your prescription drugs? The NRLN Is advocating that Congress should remove the prohibition on Medicare negotiating drug prices and replace it with a competitive bidding model. Legislation is needed to end pay-for-delay and other brand name drugmakers’ tactics that obstruct generic drugs from coming to market. The NRLN has lobbied to allow importation of less expensive drugs from Canada. A July executive order will accomplish that. The NRLN supports S. 4199 in the Senate Committee on Finance and H.R. 3 passed in the House in December. We want the Senate to pass its bill so it will go to a conference committee with the House bill. Congress needs to do its job and compromise to provide relief from sky- rocketing drug prices.

Is your retirement pension secure? Many employers have converted pension plans to third-party insurance company annuities. When “de-risking” occurs with the purchase of an insurance annuity, pension plan participants lose the protection of the Pension Benefit Guaranty Corporation (PBGC) and the Employee Retirement Income Security Act (ERISA). The NRLN’s proposed legislation would protect retirees.

What would happen to your pension if your former employer acquired another company and merged pension plans? The NRLN is concerned about the merging of pension plans with very different levels of plan assets and liabilities. The PBGC not only lacks advance notice of intra-firm mergers, the agency has waived the requirement for post-event reporting of plan mergers. The NRLN is lobbying for legislation to require plan mergers to be reviewed in advance by the PBGC and IRS and challenged if necessary.

Have you or someone you know experienced pension recoupment because your pension benefit was miscalculated? Currently, there is no limitation on recovering pension overpayment due to a calculation error. Under the NRLN’s proposal being considered on Capitol Hill, the legislation would clarify that a company does not have a fiduciary duty to recoup overpayments, but if it chooses to do so, it must be done within three years of the initial overpayment. Further, the company may not recoup more than 10% of the amount of the overpayment per year, and it may not recoup against a beneficiary of a participant.

The Villages Chapter of the National Retiree Legislative Network (NRLN) is concerned executive orders to defer from September 1 through December 31 the payroll tax will deplete the Social Security retirement trust fund by 2023, and its disability insurance funding by the middle of 2021.

According to Jim Bodenner “If the Social Security Trust is drained and there is a subsequent recession, then General Tax Revenues will dry up which will create a crisis for a large portion of the 65 million Social Security beneficiaries, destroying Social Security for our children and grandchildren. Bodenner is a member of the Villages Chapter leadership team.

A 12.4 percent payroll tax split evenly between employers and workers earning up to $137,700 (for 2020) is a vital funding source for Social Security.

He said the Social Security 2100 Act comes the closest to the NRLN’s position to make Social Security financially strong for the current generation, our children, grandchildren and great grandchildren by funding the program for the next 75 years. The bill would achieve the funding by a minimal increase of 1.2 percent in the payroll tax for employees and employers on earnings with the annual escalation of a few hundred dollars as it does now. The major difference in funding is that the payroll tax would apply on earnings of $400,000 and above.

The NRLN and AREF Partnership

The National Retiree Legislative Network (NRLN) created the American Retirees Education Foundation (AREF) in 2014 to develop whitepapers and advocate policy recommendations for retirement security to federal policymakers, constituency groups, the media, and the general public. The AREF, an IRS 501(c)3 tax-exempt organization, researches and produces whitepapers and other materials and can use them to educate NRLN members and other advocates on how to present legislative proposals. The AREF can advocate proposals to members of Congress and federal agencies but once a proposal is introduced as a bill, only the NRLN, an IRS 501(c)4 non-exempt organization, can lobby for passage of a bill. The AREF can advocate but not lobby. This allows members to make tax-deductible donations that are accounted for separately from NRLN contributions. To learn more about the AREF go to www.arefseniors.org .

All AREF revenue comes from individual tax-deductible donations. A donation to the AREF may be made by going to the AREF website at arefseniors.org and clicking on the “Donations” tab.

Speakers' Bureau
See What They Cosponsor

Click Image or Link Below to See the Full Report 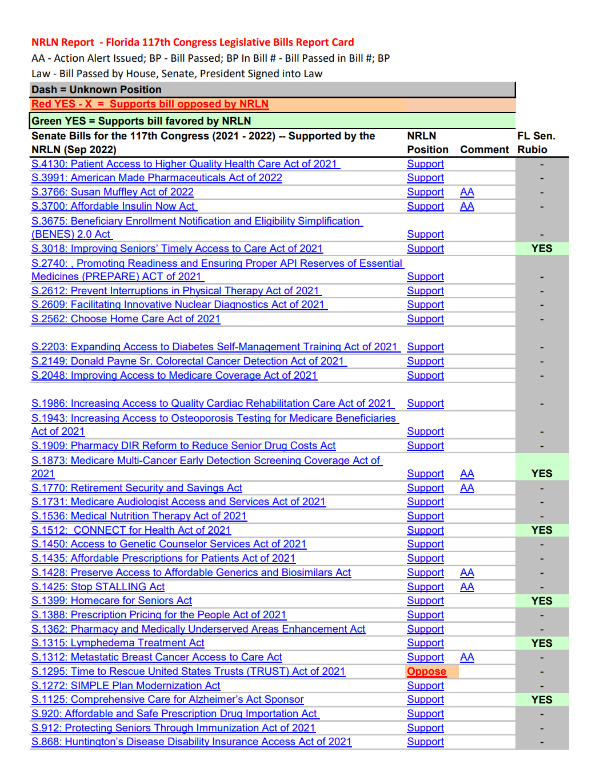 NEWS FOR THE VILLAGES MEMBERS

Rather than duplicate links to articles that are posted IN THE NEWS on the NRLN website home page, we will endeavor to post here articles of particular interest to Villages residents.

Please visit the NRLN home page for a wider range of news of retiree news.

Happening in The Villages

Many Villagers are not aware of new law that includes Medicare benefits  Published in the Villages-News.Com

Telemedicine Is a Tool — Not a Replacement for Your Doctor’s Touch
By Elisabeth Rosenthal; Kaiser Health News ~ May 06, 2021

To view the videos or listen to the podcasts dealing with the October 15 to December 7 Medicare Enrollment period, click here.

To assist you in collecting and analyzing Medicare and Medicare Advantage alternatives, posted in the center column on the NRLN’s home page are the steps to follow to gain information from www.medicare.gov to view, download and print information on premiums, deductibles, copays and coinsurance for plans available in your state and area.

How You Can Help: